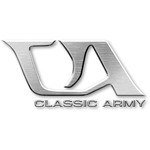 The Classic Army Scarab Carbine AEG Airsoft Gun continues Classic Army's history as a leading manufacturer of airsoft products and a company known for its innovation and setting standards for the industry. This gun fully lives up to this Hong Kong company's dedication to total performance.

The Classic Army Scarab is a full-metal airsoft gun with an impressive number of features. Its monolithic rail system has top and bottom Weaver/Picatinny rails and side KeyMod sections. The rail system's monolithic profile gives you plenty of rail room to add optics, lights, lasers, forward grips and more, upping your game and increasing the gun's effectiveness. Set the adjustable stock into three positions or remove it from the gun's body for better portability and lighter weight. The ambidextrous charging handle, fire selector and magazine release are great for versatility. The gun also comes with flip-up front and rear sights and an ergonomic grip that help you zero in on targets while letting you shoot all day and night if you want.

Internally, the scarab has an electronic trigger unit, 6.03mm tight bore barrel, silver low resistance trigger wiring, and a quick change spring system. The quick change spring system allows for fast and easy spring changes without having to go into the gearbox. The design of the Classic Army Scarab provides a very crisp trigger pull bringing users satisfaction with every shot.

If you are looking for an airsoft gun that is as accurate as it is reliable, look no further than the Scarab Carbine. Its durability and versatility make it a smart choice.

Features
The RAC, "Rapid Assault Carbine" Combat Rifle, is the standard length SCARAB, featuring a 10.5" handguard, a 300 round hi-cap magazine and a extending multi position stock, Great both in woodland and FIBUA (Fighting in Built Up Areas) this is the SCARAB that gives you the best balance in all round performance.
In our initial testing we managed to acheive a RPS of 15, using a 7.4V battery, with an average of 340 fps muzzle velocity using 0.20g BB's with the Hop Up wound all the way off. With the Hop adjusted for maximum range, we acheived a muzzle velocity of 288 fps.
Monolithic Upper
Unlike most Airsoft AR-15's that have a two part upper, the SCARAB has a one piece upper, this allows for a stronger overall design and also a monolithic rail that stretches all the wa from the front to the back, allowing you to mount more accesories.
Quick Change Spring System
The SCARAB series features a quick change spring system, the rear detaches from the receiver and you have direct access to the spring.
Electronic Trigger Unit (ETU)
Replacing the normal trigger switch the ETU allows you to program the SCARAB into a number of fire modes. Straight out of the box the SCARAB is set to SAFE-SEMI-FULL, but there are 4 other modes to select from including 3-shot and 5-shot burst!
Low Voltage Protection
The ETU will detect if a battery is low on voltage and shut off to prevent damage to the gun and the battery.
Motor Protection
If the trigger is pulled 4 times in succession and motor does not turn over, the ETU will shut off the power supply to prevent internal damage to the gun.
KeyMod Rail
The handguard is equipped with KeyMod slots on the side. This gives you a nice narrow profile handguard that is easier to grip and allows you to use low profile KeyMod accesories. The Top and Bottom rail are standard 20mm RIS Style to allow fast mounting of optics and grip systems.
Low Resistance Silver wiring Deans Connectors
Straight out of the box the SCARAB series comes with DEANS connectors, These connectors are taking over from the old standard mini Tamiya connectors as they are much more efficent and are lower resistance, giving you better overall performance in your AEG.